The regular crunch of gravel on the sunlight dappled driveway. We were off.

To the left, and partially obscured by lichen shrouded fence posts the manor’s gardener was still locked in eternal battle with the unruly borders, the manor dog barked madly, scrabbling to get under the fence and attack.

Remarking that the dog must be neurotic we nonchalantly strolled forward, past the quiet old church and dying yew tree and the graveyard gates and sign demarcating the end of the road. To much sighing and smiles, Eric eagerly drank from each of the small muddy puddles which punctuated the gravel path that connected road to field. Past the Colonel’s neat hedgerows, monkey puzzle and eager hounds then through the swinging gate, a tangle of lead and dog, and out into farmland. 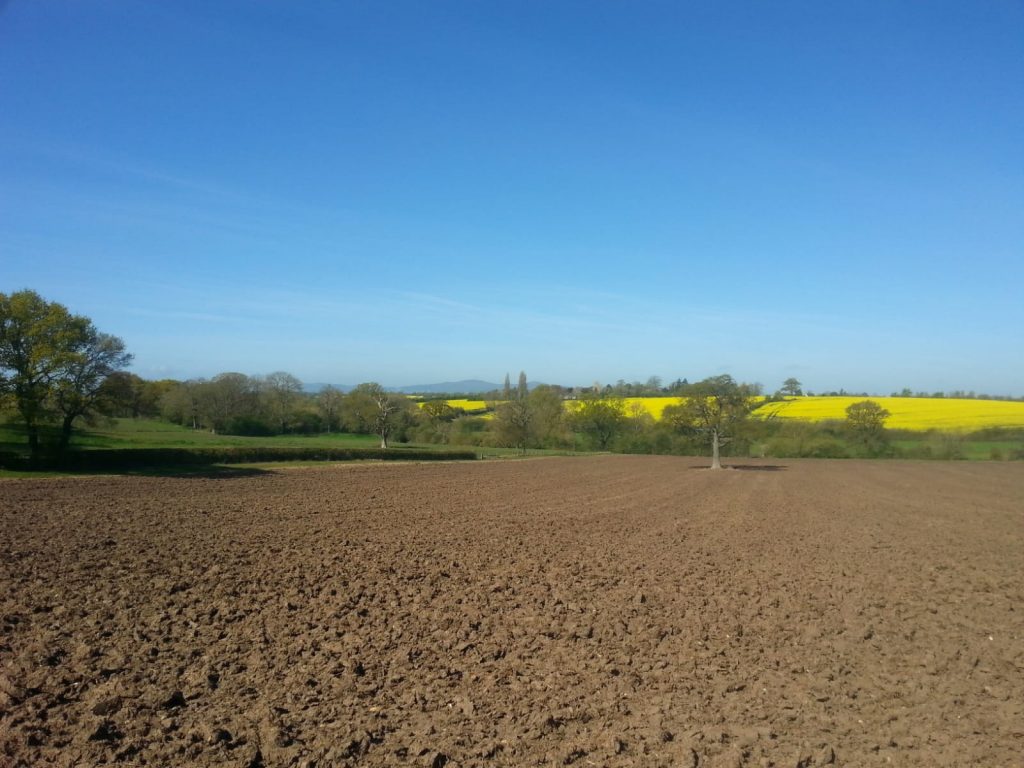 The wheat was half grown, still green and tough, and grew across the gently sloping hillside like a thick green blanket. Scoured in to the crop was a path, diagonally through the field corner to corner. We wouldn’t go that way today.

We stuck to the edge, hemmed in between crop and busy hedgerows rife with bug life, nettles and grasses. Periodically Eric would emerge through the undergrowth sporting a growing collection of burs, grass and pollen which clung to his white fur.

We made our way past the ditch and Eric briefly agitated to take another path before reluctantly following the group. Every so often we would stop as dad pulled out his binoculars and scanned the horizon, hedgerows and power lines or perhaps the source of particularly interesting birdsong.

Then we’d continue further down the hill, around or through the sticky clay and to the fields corner where arable land met marsh.

A longer pause, bringing up the binoculars again, another juncture for Eric to consider. We would take the usual path through a swinging metal gate in the middle of which was a permanent quagmire. We cautiously pass, making use of the stones placed by other walkers to make easier passage. Eric awkwardly hopped over and out into the meadow.

This time of year the field was stuffed with wild flowers, young leafy trees and soft sounds from the adjacent stream. It was a pause between the farmland and young woods, tranquil and insulated from its surroundings. Following the stream we’d listen for birds, check the bushes and wait by the bridge as Eric slowly made his way down the stream’s bank, which was slick from the coming and going of other thirsty dogs. Back up, through another steel gate and into the woods. 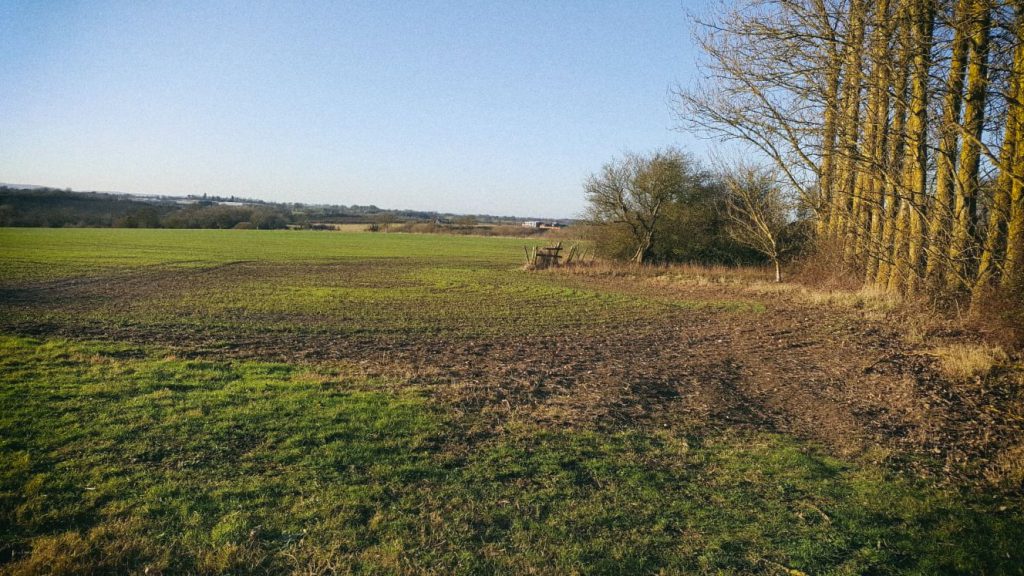 Given its youth the wood had not yet been thinned and trees grew densely in fierce competition for light and space. Outside of the clearings and borders, all other paths through the wood required us to walk in single file until we broke through to the two large mounds of earth in the central clearing.

To help the locale deal with floodwater a ditch had been dug nearby and the soil had been deposited in the middle of the wood just before the first trees were planted. A point for pause. We would sit atop the mounds, looking out at the patchwork fields around us. When we were younger me and my brother would comb the fresh soil for fragments of ammonite fossil and the occasional devil’s toenail which were at first bountiful. Today the easy targets had been scooped up and the rest lay, buried again, deep within the mound. Thistles had taken their place and Eric nervously padded around trying to find a safe spot to flop down. Along the horizon you could make out the church atop the hill, the neighbours house, and perhaps ours nestled among plentiful greenery. 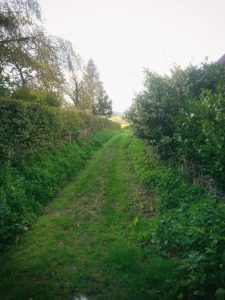 Walking again, down the hill out towards the far corner of the woods where the path widened, bordering with the pasture upon which the farmer grazed his sheep and to where Eric had once escaped, only to reappear some time later deeply entangled in hedge. The ground grew harder and compact from the passage of the machines used to build the mounds.

We hit the sad corner of the wood and met the sound of cars passing from the perpendicular A-road. Polystyrene containers, old plastic crisp packets, tissue paper and other junk had been chucked from the windows of indifferent drivers. To them it was just another road. 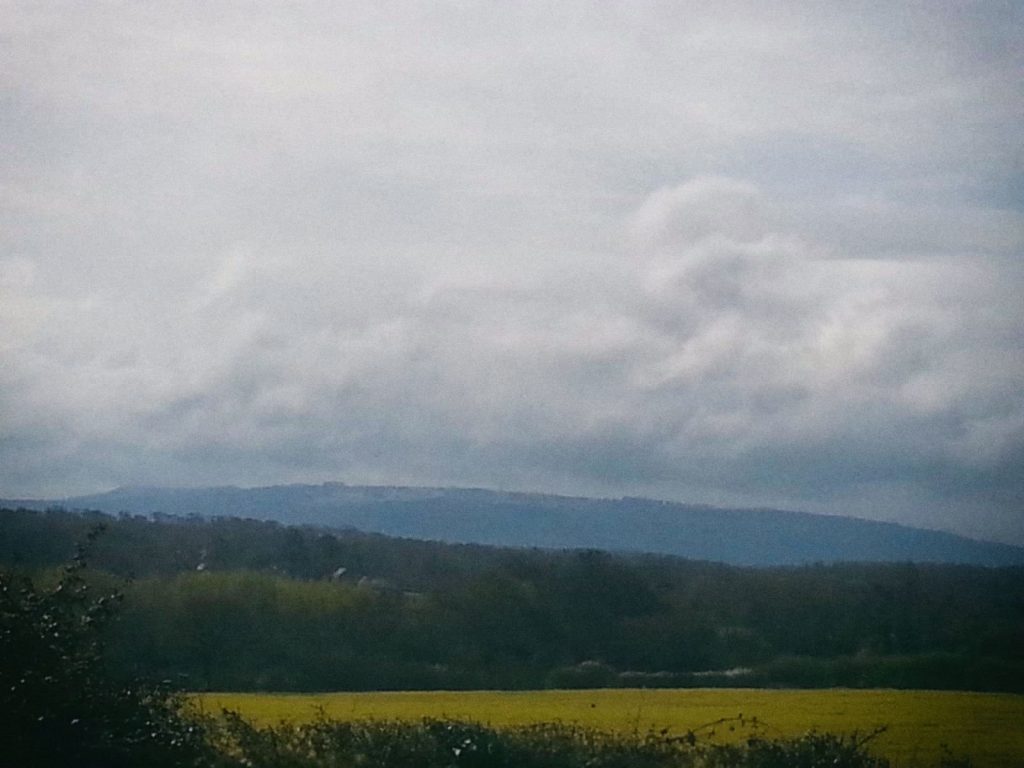